The village of Castelnou is one of the most remarkable sites to discover in Catalonia, and is also classified as one of the most beautiful villages in France.
Surrounded by two limestone plateaus, the Causse de Thuir and the Roc de Majorque (alt. 443 m); nestled at the foot of the Aspres, this village founded in the 10th century seems to have been forgotten by time, after having been the capital of the Viscounty of Vallespir for more than three centuries. 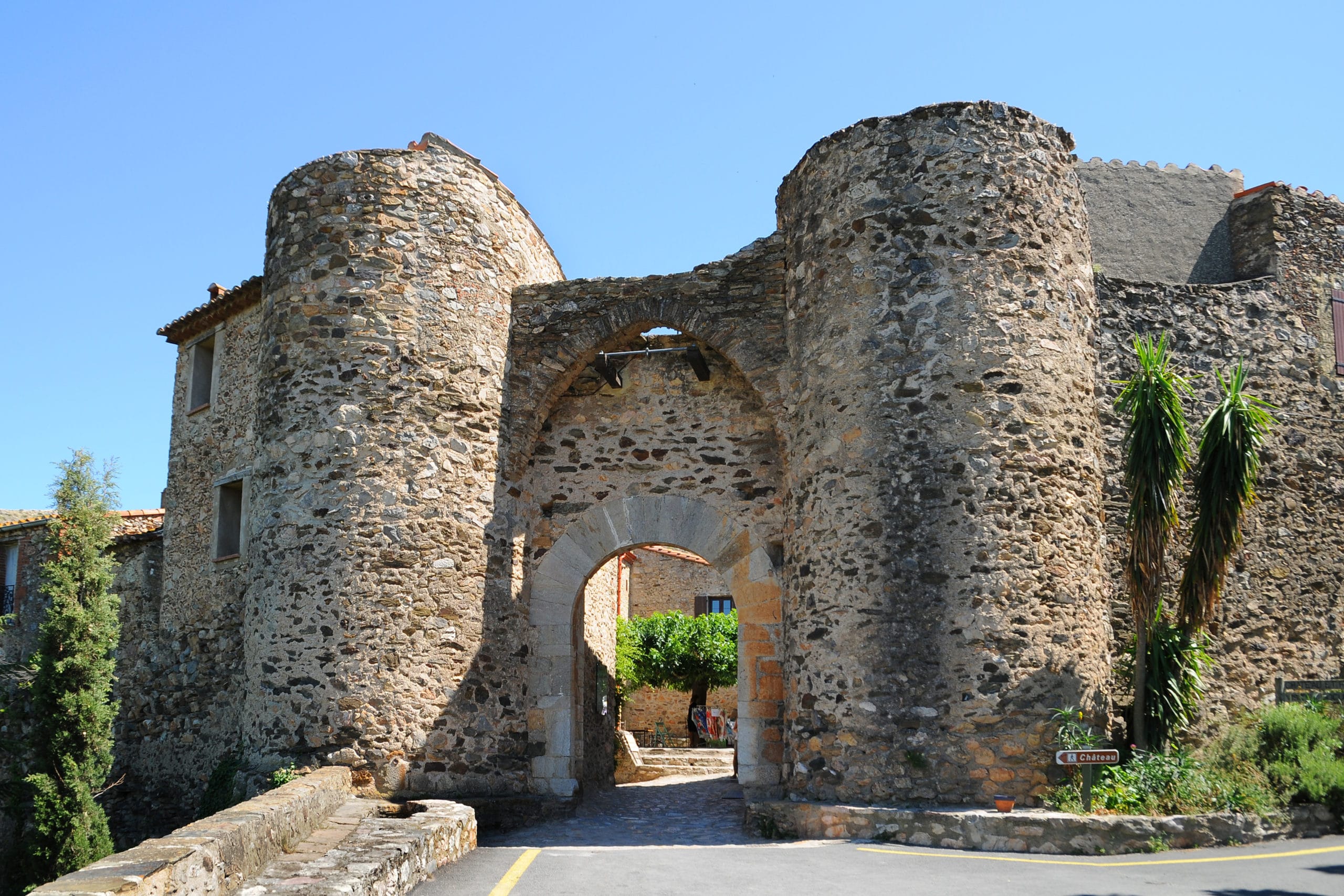 The village still retains its medieval appearance with its ramparts punctuated by 8 towers and 4 gates arranged at the 4 cardinal points, its watchtower and its viscount’s castle built in 990 by the Viscount of Castelnou to serve as a military base for the Viscounty of Vallespir.
The village is organised around two parallel streets, the carrer d’Avall and the carrer del Migt. A visit to the village reveals bread ovens, painted genoises on the reverse side of the tiles and several houses also have beautiful, well-cut stones from the castle.
Most of the fortifications remain, the most notable being the Millars gate to the north of the village, flanked by two towers.
Castelnou in Catalan means “new castle” in French

In front of the northern entrance, on either side of the gate, two imposing towers mark the access to the village, we find ourselves at the northern gate known as Millars, this opening dates from the middle of the 14th century, once we have passed through the monumental gate, we discover a very pretty square planted with a superb mulberry tree, this square is the plaça de l’escola.

The appearance of the village has not changed and we find two practically parallel streets. These are the two main axes of the village, punctuated from time to time by stairways that allow the passage from one to the other. If we take the carrer del Mig, we can see houses with external stairs, giving onto a small covered terrace, underneath which there is usually a door opening onto a stable, a sheepfold or a barn. Sometimes an excrescence protrudes from the wall, these are semicircular bread ovens grafted on to the façades. There were no collective ovens in the village, the families who had the privilege of owning one rented it out to other villagers. Looking at the underside of the eaves, we notice the red bricks “cairous” painted with various motifs made with lime: triangles, chevrons, suns, meanders…these are protective signs to ward off bad luck, illnesses, witches… ….. From time to time we can discover a curious pierced stone, sealed in the wall, which was used to tie up the mules

You will also find here and there numerous catapult balls, timid witnesses of two sieges by the kings of Mallorca, notably in 1286 and 1314.Finally, you will notice the presence of a great many elements made of wrought iron, a reminder of the medieval period when the viscounts, and notably Guillem V, adorned all the churches in the region with iron doors, which was none other than a door armouring.

The castle is currently closed for works. 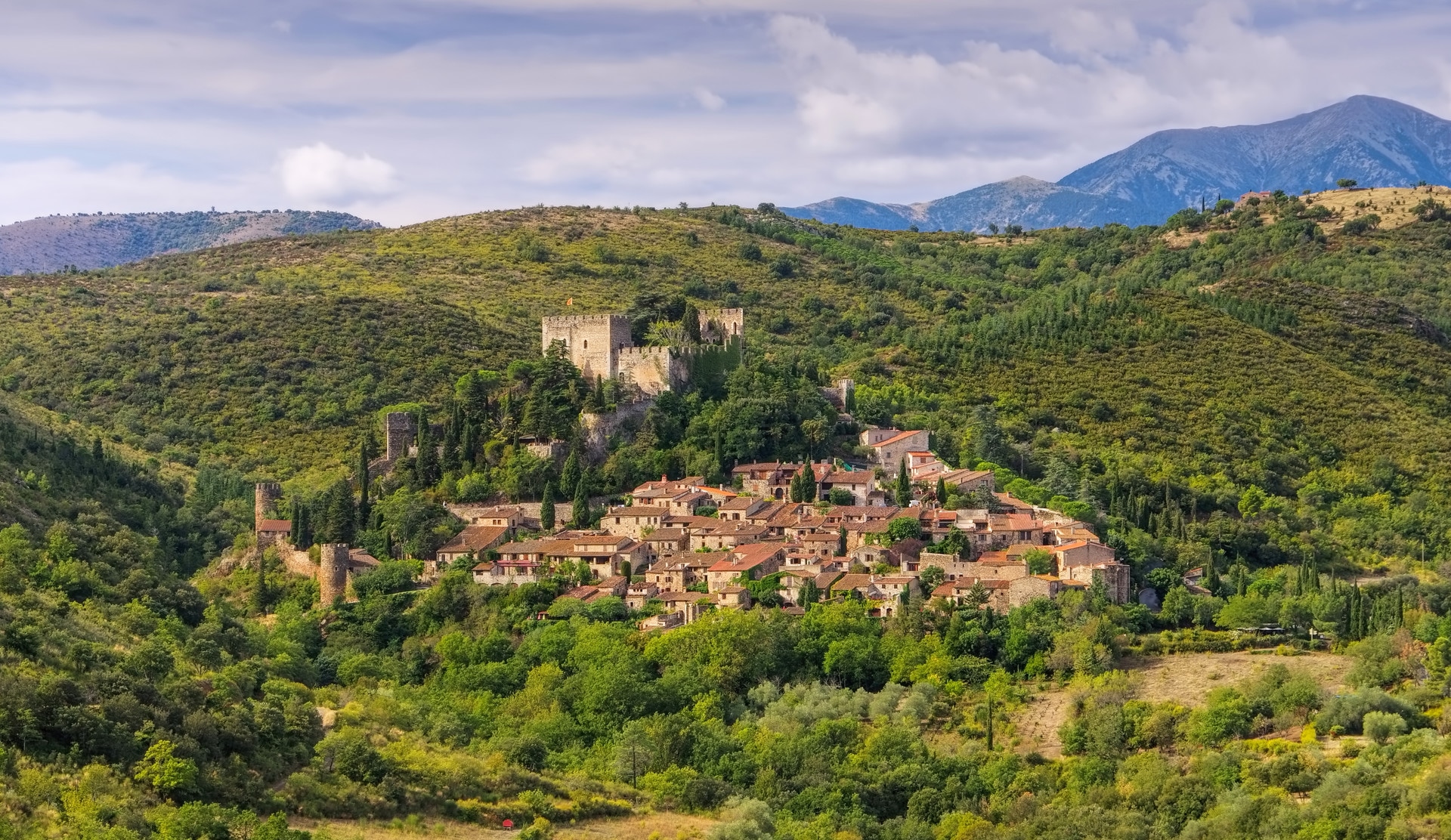 Situated on a hilltop to the northwest of the village and castle of Castelnou, this single-storey vaulted watchtower dates from the 13th century. It prevented the enemy from taking the hill opposite the castle, acted as a scout for the village and was the only means of communication with Spain thanks to fire signals.

There are also numerous catapult balls here and there, timid witnesses to two sieges by the kings of Mallorca, in 1286 and 1314, as well as beautiful carved stones, sometimes with chamfers, from the castle’s door frames. In 1559, Pierrot de Llupia, whose bad character was well known, suffered reprisals for his misdeeds and the castle was dismantled. 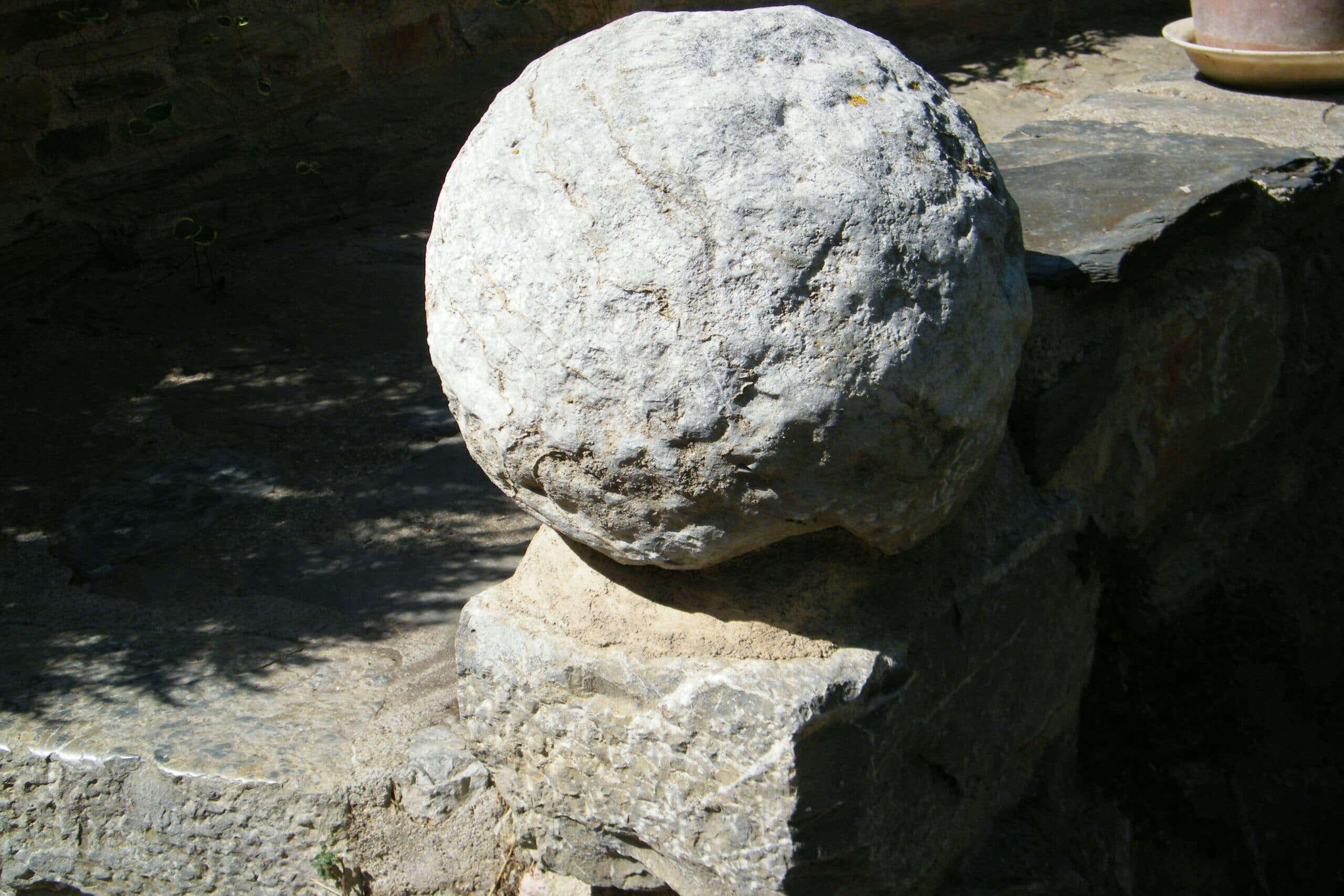 If you look at the underside of the eaves, you will notice the red bricks “cairous” painted with various motifs made with lime: triangles, chevrons, suns, meanders…these are protective signs to ward off bad luck, illnesses, witches……. These drawings are found exclusively on dwelling houses and never on barns or stables. This tradition dates back to at least the 18th century and has been established in Aspres for some reason. It seems to have come from the island of Mallorca.

With its status as one of the most beautiful villages in France and thanks to its geographical location between the sea and the mountains, Castelnou is a very touristy village with an average of 400,000 visitors per year who come to discover this ancient medieval town and while strolling through the cobbled streets they can discover numerous art craftsmen, visit the art galleries or taste the local gastronomy 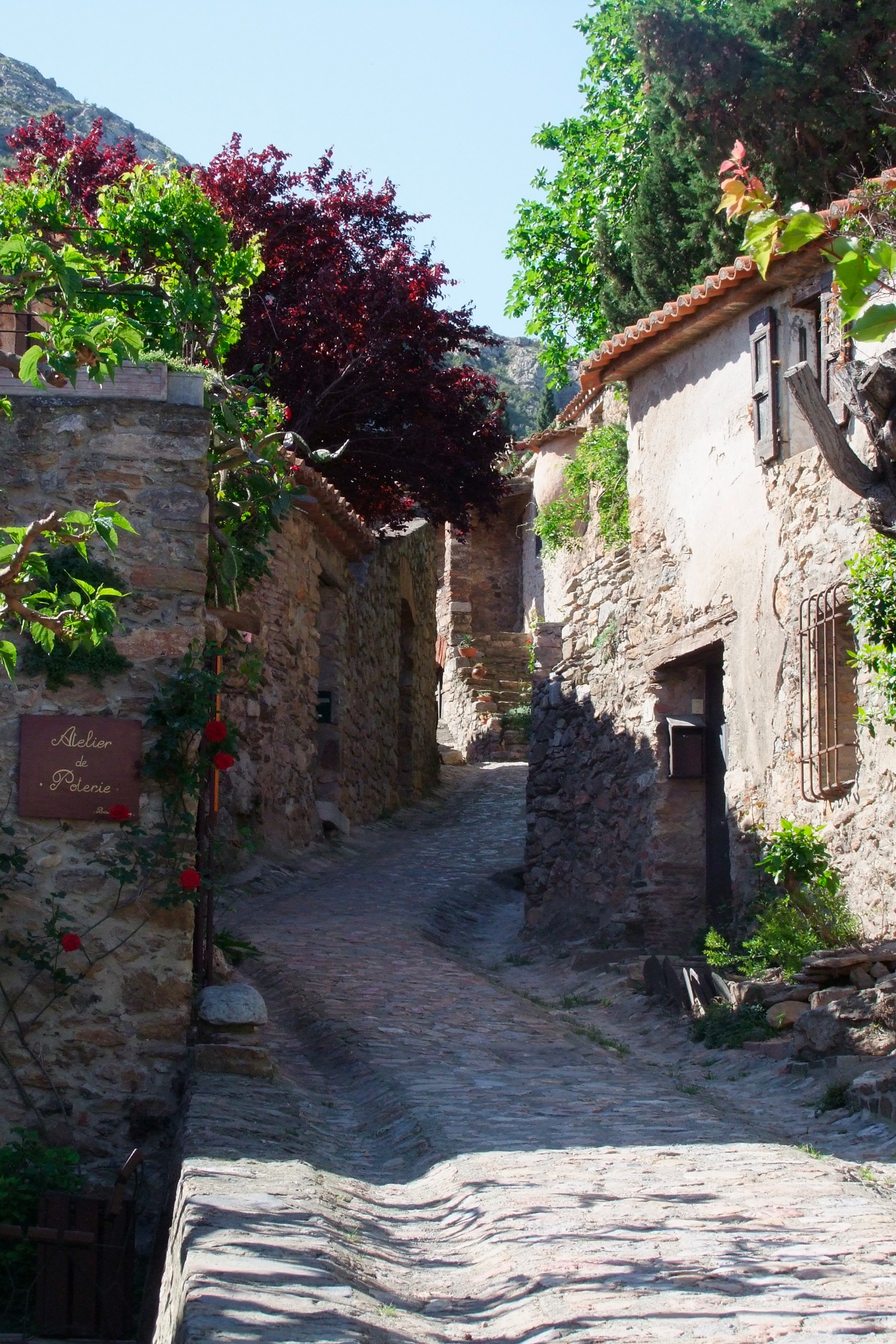 The history of the village begins with the history of the castle, which was inhabited in 990. Its shape, an irregular pentagon, follows the steep line of the rock on which it is built. It served as the military and administrative capital of the Viscounty of Vallespir in 1321. Despite its elevated position, it was besieged at various times, particularly during the struggle between the kings of Majorca and Aragon from 1285 to 1295, and then in 1559 with that of the lord of Castelnou and the governor of Roussillon. In 1875 it was sold to the Viscount of Satgé, a native of the Conflent, and in 1900 the castle became an elegant and habitable fortress. The building has a remarkable feature: its walls contain a crown of buildings that surrounds not an inner courtyard, but the top of the hillock on which it is built.The castle is currently being renovated and is closed to the public; it was purchased by the Departmental Council in 2019.

The Château de Castelnou has opened an information and reception area.

While waiting for the end of the security work and its reopening: this space remains closed for the winter. 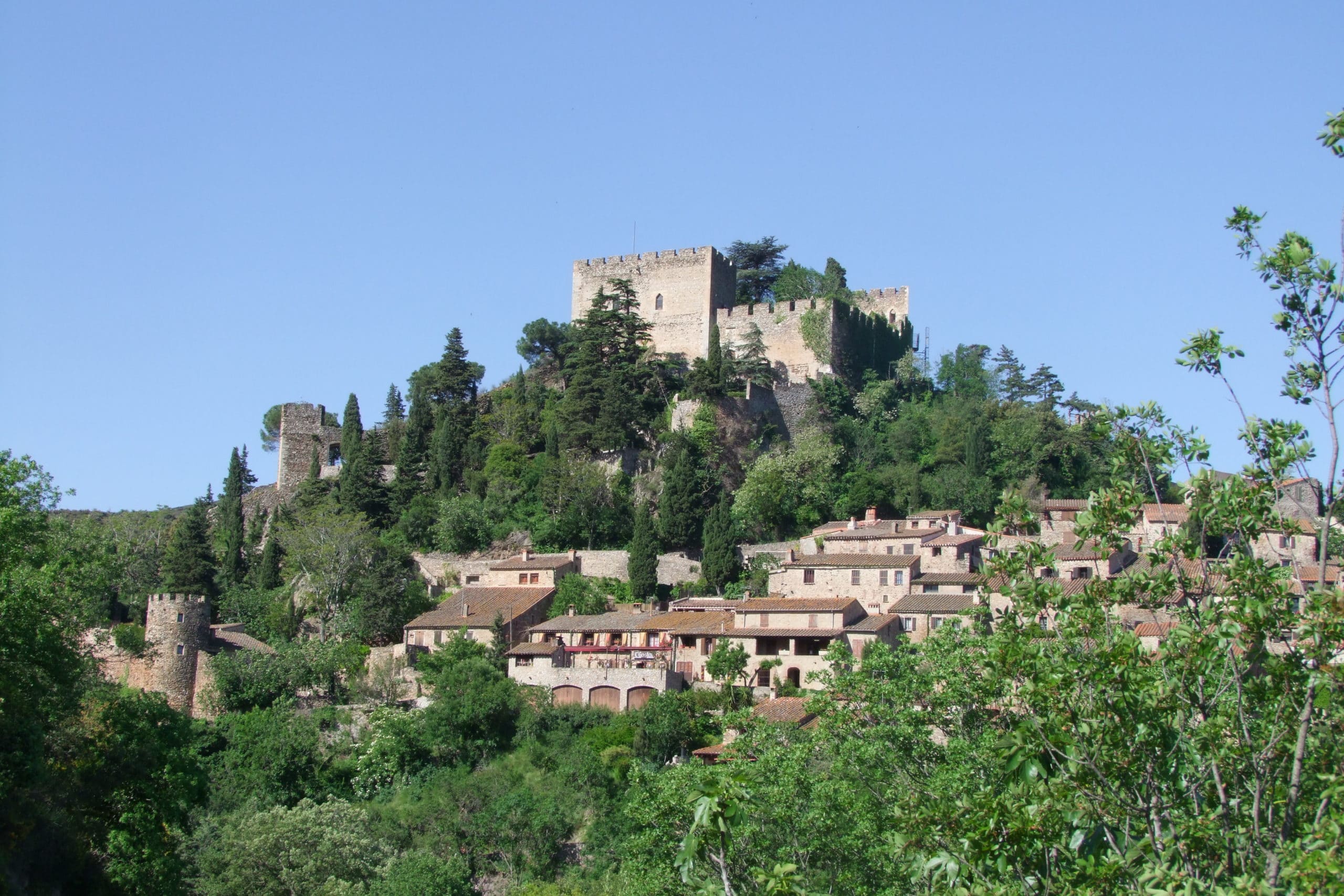